MISERY LOVES COMPANY
Poster Art in COLOR
For more artwork check out the storyboard page.
Also, be sure to check out Carlo's illustration blog for more of his work.
Posted by O'Brien at 12:01 AM 0 comments

When it came to the locations/setting for the story there was a strong conscious effort made to keep it simple and manageable, yet ambitious and engaging. I didn't want to regulate myself, or the story, to the confines of my bedroom or house. At the same time I also didn't want to build an elaborate custom village. Simplicity was the key to the script, like a play - small scale, limited locations. Even with this criteria I didn't want it to look cheap. Production value is a vital component in lending authenticity to a script when transferred to film and unlike many other independent filmmakers, I wasn't going to remain ignorant to that fact. The few locations that we actually needed were not going to be compromised in favor of producing the story, because without them there was no story. That was yet another thing that held up the production of this film for a long time; the existence, access and availability of the locations/setting for the story.

All in there were about 12 different locations. I say about because some of the locations had multiple settings and functions within the story. For example, we did a whole day of filming at a park, but within that park we filmed four different settings and six different scenes. The efficiency of the script loaned itself remarkably well to the shooting schedule. Of the sixty-six scenes they split up pretty evenly on the schedule, which revolved around a weekly commitment to a particular location. Sticking with common, convenient settings helped us (the production) obtain the locations. Engineering them into the story allowed it all to remain interesting.
Slowly the locations began falling into place. Of course there were still some holdouts. There was nothing extravagant or unrealistic about my needs outside of not possessing some of them, but that wasn’t going to stop me. Still, a little legwork and a lot of persistence landed us the final settings. As always, each location has its own evolution in the story. The following is a profile on each of the main locations and the story of their place in the story of MLC. 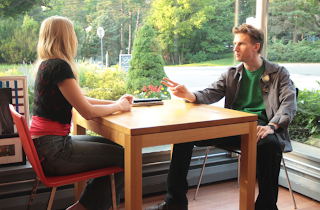 Serving as narrative bookends, the coffee shop is a public display case for the events of the story. Originally set in a busy dinner, the scenes in the coffee shop are a little more intimate and anchor not only the story, but also the character of Brian. From the story’s inception I had wanted to open with a public setting making it a more natural segue into the private events of the story. This forum introduces the main character, Brian, in a way that doesn’t come off as contrived or forced. We’re meeting him halfway as he enters this part of the story of his life. The coffee shop location was ideal for this opening/introduction because of the construction, layout and design of wall of the place. The entire front of the shop is plate glass, which not only allows a lot of natural light into the place, but also provides a dynamic visual looking out into the neighborhood.  Originally all of the scenes at this location were to take place during the day, but because of setback during filming we had to change one of the scenes to a night shot. We couldn’t hide it because of the massive windows, so we embraced it and it actually wound up working out much better both visually and for the story. Sometimes things are just meant to be.

LOCATION: Brian’s Apartment (Private residence, Chester, NY 10918)
Since most of the movie is a character study of Brian it was 100% necessary to have a unique domicile for him to inhabit. Despite having written and playing the character I did not want to share a bed with him as well. For starters, Brian and I are very different when it comes to out personal lives and those are the kinds of things that would be reflected in one’s home. Granted, many of the items in his apartment came from me, but there was also a lot of stuff donated from others such as furniture, decorations, and filler belonging to the apartment’s original owner. Since the beginning, back in 2003, I had been on the hunt for a place for Brian to live. At different times I had considered renting, or subletting, an apartment during production just for him. I would always be sizing up friends’ places and at one time I even went so far as to measure and map out the entire place. The apartment couldn’t be too fancy and decorative, nor could it be lavishly furnished. It had to reflect Brian’s life both personally and financially. In the end, Brian wound up moving into the spare bedroom of a very good friend and hi-jacking his life for about two weeks in July. Actually, I did most of the moving and all of the hi-jacking, but it was for Brian.
LOCATION: Movie Theater (The Paramount Theater, 17 South Street, Middletown, NY 10940)
The centerpiece of the film, an old-fashioned, independent, single-screened movie theater served as the stage for most of Brian’s dramatic exploration and existential discovery. This was one thing that could not be compromised for the sake of filming. Evolving out of reality, the movie theater and Brian’s job as a projectionist came to symbolize many different things about the character. Out of all of the locations this was the one that would make or break the production, which it almost did. After ruling out corporate multiplex chains, as written into the original script, I reached out to every independent movie theater within a fifty-mile radius. Knowing full well that this was going to take some time I began my quest at the very beginning of pre-production. That extra time only allowed me to receive more rejections from unwilling theaters. In the end one of the first theaters I contacted had mercy on me and allowed us to film there for half a week with two additional days for pickups thrown in at a very reasonable price. I cannot say enough nice things about Nelson Page and his staff at Majestic Star Entertainment, so I’ll just direct you to this article about his Big Screen Classics film series. Enjoy!

In the spring I had the realization that one of the more elaborate and vital settings had become very available to me. I couldn’t have all the action take place on Brian’s terms, or turf. The bar acted as Veronica’s place of employment as well as a social meeting ground for the characters outside of Brian’s apartment. In the script from day one, this location, along with the theater, were the biggest variables. Occasionally places of interest came and went, but always with the uncertainty of accommodation. Although there were only three scenes in this setting they were quite large and ambitious, considering one of them included an entire band playing a show in the background. That’s not the kind of thing you can just ask a strange for, even with insurance. Fortunately my sister and brother-in-law had become co-owners of a well-established pub in the neighboring town and were very supportive of the project, allowing me, and my crew, to film outside of normal business hours. 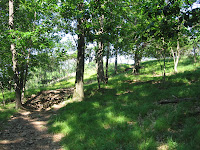 LOCATION: Wilderness (Undisclosed natural settings – Congers, NY 10920)
Whenever possible I love to film in Congers.
This is the last of the key locations and arguably the easiest to attain since we didn’t have to get permission from anyone. Actually, we didn’t ask for permission, which is why the location remains undisclosed. In the evolution of the story and script I knew that I wanted to get the characters out of their normal settings (i.e. WORK), so I wrote in this sequence that takes them out for the day. Originally it was a very sappy date sequence that took place at the beach and on a boardwalk. Through maturity and re-writes I kept the essence of the sequence, but completely changed the setting to a much simpler, yet interesting location. While we were in the area we were able to incorporate two additional scenes that didn’t have a specific location selected.
With the above locations lined up and secured my cast, crew, and I set out on a seventeen day adventure, spread over roughly eleven weeks, with the bulk occurring in the first three. The following posts will be a day-to-day account of principle photography on Misery Love Company, with occasional throwbacks to pre-production as well as glimpses into the present and future of the film though the post-production process. Stay tuned, it’s about to get very informative and interesting.
The saga will continue with Day 1.
In case you missed it, read it from the beginning in EPISODE I: The Script
Please, “Like” the film on facebook for more direct updates involving the cast, crew, and screenings.